With the rudder done and out of the way, I got back to work on the horizontal stab. While the rudder was curing, I got the rear spar ready for riveting. Today I got the front spar all set.

The front spar is a little more complicated, in that it has some additional doublers in the form of spar caps, and it also needs to have the attach brackets aligned and installed. These are the brackets that I did in the last HS build blog. 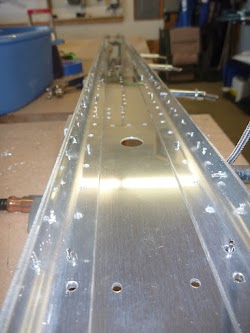 The caps were the same process as the spar caps on the vertical stab… cutting them down, clamping them on the spar, drilling out one side, then the other. 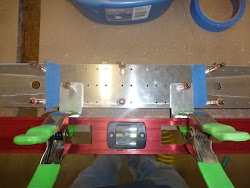 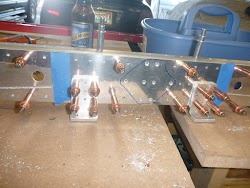 The bracket attach had the added concern of getting everything lined up perfectly. These are the brackets that will hold the HS on to the plane, so it’s kind of important to get them straight. I clamped them to a level while I drilled them out. I also double checked that the brackets both sit at the same height… which they do. If they didn’t, the horizontal stab might sit at an angle!

Tonight’s video has a special guest appearance by Sean and Lexi Martin, who stopped by to see how the airplane was coming: