Picking up where I left off yesterday, I began by making sure the rear edge of the top cowl was perfectly aligned to the rest of the plane, and then I match drilled the cowl to the cowl hinge.

Next, after a lots of back and forth getting everything lined up, I did the same thing with the bottom cowl. Lots of duct tape was used during this process! 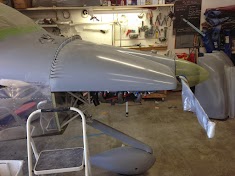 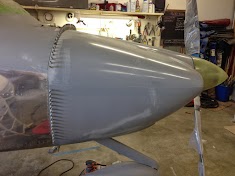 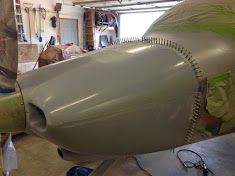 With the top and bottom cowl attached to the fuselage by their back edges, the only remaining edge was where the two halves meet. To make this line perfectly straight, I used a laser level that I shot from across the room. The thickness of the laser beam was about the gap I was looking for between the halves. So with the laser as a guide, I first drew the cut line, and then actually made the cut on the top cowl first. I aligned the cut line to be as close to the bottom edge of the top cowl as possible, while still maintaining a straight line. This would ensure that there was enough material between the halves.

Once the top cowl line was trimmed, I once again turned on the laser and made sure it was still aligned with the now cut upper cowl. Then I put the lower cowl on with it overlapping the upper cowl on the edges. The laser then showed me exactly where the upper cowl edge was, and I drew my line and made the cut. A quick pass with a long sanding block and I had perfectly straight parallel cuts that matched up perfectly.

I then repeated the process on the left side of the plane. 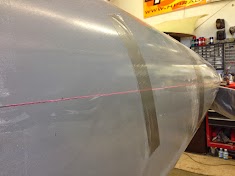 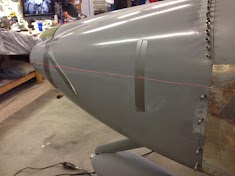 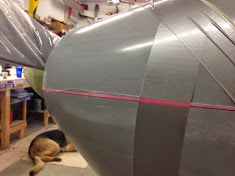 Next, I made up the hinge material that will join the top and bottom cowls together, and match drilled the hinges to the lower cowl.

And finally, I started match drilling the right side upper cowl hinge. However, after I finished, I realized that I had way too much gap between the two halves, because I used too thick of a spacer while match drilling. I need to order a new piece of hinge so I can redrill the upper piece a little tighter… 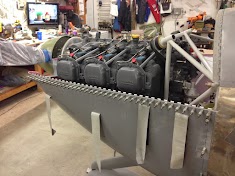