I had some time to sit down and actually get a little bit of work done on the plane tonight. Specifically deburring all the holes in the HS ribs. Not real exciting work, but it’s done now! 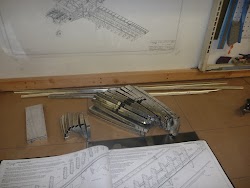 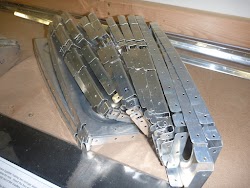 I didn’t end up getting anything done on the plane this weekend because of working on the car on Saturday… then on Sunday, a bunch of us went on a brewery tour of the Leinenkugel’s brewery in Chippewa Falls, WI. Cool place to visit. When we got home, I turned right around and headed up to the north side of the cities to meet Mike, another RV-10 builder. Mike showed me how his build was going and some of the tricks he picked up during the build of this plane and his RV9a. He’s just begun on the wing kit, so he is a few months ahead of me. He also loaned me his RV10 elevator bucking bar (which is only used in one step of the entire build) and an angled die he made to squeeze the trailing edge double flush rivets. It was a great meeting topped off by him showing me his RV9… which is beautiful. Mike and I have very similar thoughts on how we want a panel laid out!

So that’s it for tonight. More deburring to follow.