….and some more rivets…

You guessed it. I did some more riveting tonight. Two hours worth. I’ve been using my left hand to hold the bucking bar, but I think I’m going to have to learn to be an ambidextrous bucker. Even with the tungsten bar, which works GREAT, my hand is in pretty tough shape after two hours. 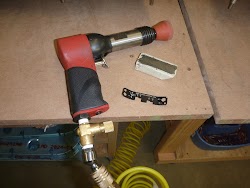 So tonight I was able to finish riveting the front HS spar, and all the rivets that attach the stringers that run in the center part of the stab. All that’s left is the rest of the rib rivets, which should go pretty quickly, and the rear spar rivets, which should go even faster since I can get them with the pneumatic squeezer. I’m going to go as far as saying that I should be able to finish the horizontal stab in the next build session… but we’ll see. 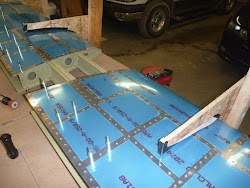 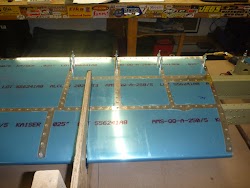 And finally, I was asked in the comments yesterday by Ryan what the plans were like. As I replied to him, the directions are VERY good. If you have basic mechanical skills and can follow instructions to the letter, you can build an airplane! Here is the page that I’m on tonight as an example (click to embiggen):