I had the day off from work, so my plan was to get a lot of work accomplished on the horizontal stabilizer.

I started the day off by replacing the nose rib that I had messed up earlier by grinding too much off the front tab. Then my father came over to help with the drilling. After a brief explanation of what we were trying to do, we got to drilling. Except instead of both working on the same section at the same time like Colleen and I did, we each took a side. It seemed to go a little better. The only negative was that I let my dad use the air drill with the reamer, and I was stuck with the 18 volt Dewalt drill. That beast gets real heavy real quick! 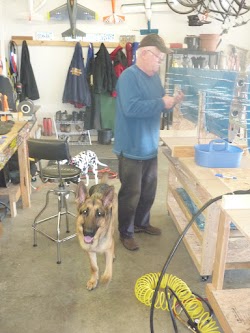 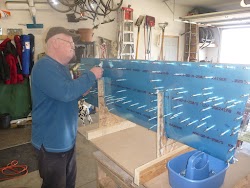 We had just finished match drilling and had started disassembling the HS when my buddy Praba called wanting to go flying. It’s March 16th in Minnesota, and it’s 80 DEGREES! Hell yeah, I want to go flying!

My dad was VERY disappointed that we would have to postpone deburring (yeah right), and I went off to go flying.

After a nice local flight, I got a bunch of errands done, picked up my new iPad, and then did some more chores around the house. By the time I got back to the plane, it was 8:30. So much for working on it all day…  When I finally did get back in airplane building mode, I got the blue plastic removed from the rivet lines. Then I fixed all those tipped rivets I mentioned the other day. They are all good now.

So up next will be a whole lotta deburring. Goodie!

One thought on “And more drilling!”