I began by finishing roughing up the window flanges and shimming out the passenger side windows with washers as needed.

I then smoothed out the edges of all the windows with some 150 grit sandpaper. This is to keep any deep scratches from the initial trimming process from propagating into full blown cracks in the windows.

Next, removed the protective film from the inside surface of the windows, and I placed the windows into the openings. With the windows in place, I was able to mask the inside of the window with 3M FineLine tape, masking tape, and paper. This will protect the windows from adhesive, paint, and general scratches as the assemble continues. I left a little space between the edge of the opening in the cabin top and the tape to give me room for a nice fillet of the Lord adhesive.

Once everything was masked off, I prepared the bonding surfaces of the windows by scuffing them up well with 80 grit, and then cleaning the surface with urethane reducer. Reducer is used as acetone or anything with alcohol will react poorly with the acrylic windows, causing crazing or even melting the windows. Naphtha can also be used for cleaning acrylic.

Now the windows were ready to bond in place. I am using Lord urethane adhesive from Aerosport Products. This adhesive is much easier to work with than the WeldOn suggested in the plans, and forms an incredibility strong bond. The kit from Aerosport includes enough adhesive cartridges for all the windows, an applicator gun, and mixing tips. You simply pop the cartridge into the gun, screw on the mixing tip, and as you pull the trigger, the 2 part adhesive is mixed as it flows out of the gun. No fuss, no muss!

For the actual install, I simply applied a nice bead of adhesive on the flange of the cabin top, and secured the window in place with the aluminum fingers I had bent up previously. Once the window was in, I went inside the plane, and with my finger (in rubber gloves) I created a nice fillet between the window and the flange. Take your time, and keep your finger clean, and you can get a very nice finished edge to your windows. On Geoff from Aerosport’s advice, I formed the fillet with my finger as well as I could. Then after about 10 minutes, I went back over the fillet with a little reducer on the areas that needed some touch up. The reducer smoothed out any roughness in the fillet and removed excess adhesive where needed.

This process was repeated with the other rear window and the pilots window. I ran out of time for the passenger front window, but I’ll get that tomorrow. 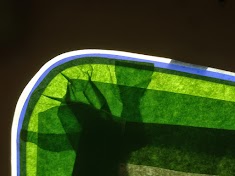 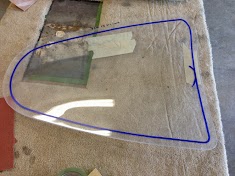 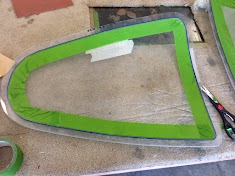 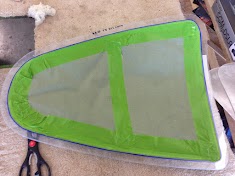 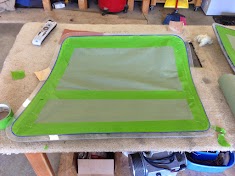 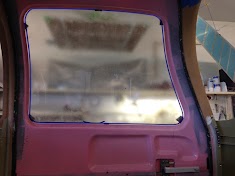 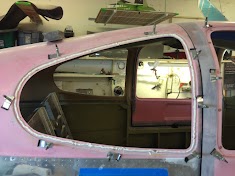