This is the step where you start seeing recognizable airplane parts. Tonight I put together the vertical stabilizer for final drilling. Started off deburring and clecoing together the skeleton, drilling all of the connection points, then putting the skin on and final drilling that. It’s a bit tricky to line the skin up with the ribs and get the clecos to grab. What I did was start with the middle nose rib a few holes back from the front, then try to line up holes where you can. 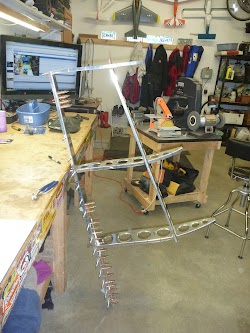 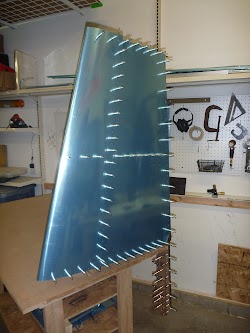 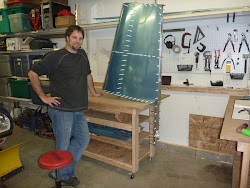 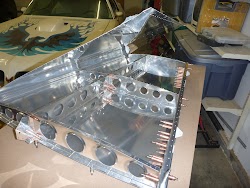 I also took a time-lapse video of tonight’s work. It’s a good thing I did, too. When drilling out the skin, I had a cleco in every other hole or so. I would drill the open hole, then go back and move all the clecos over one. This works great, unless you forget to move a row of clecos! I did just that, and missed half of the holes on one rivet line on one side. Here is the video. Can you tell which line I missed?

You can see in the video I pulled the skin off as soon as I was done drilling. I did this because I didn’t round the nose ribs off enough, and they were pushing small dents out at the nose of the skin. I didn’t want to let the skin sit in that position until I was able to sand the ribs down some more.Click the video above to play

This also meant that I didn’t catch my missed holes until after the skin was off, which meant I had to put it back on to finish drilling. Not a big deal, but I didn’t bother setting up the webcam for that little fix.