Since the aileron training edge needs to cure longer before I attempt to rivet it, I decided that I would start construction of the flaps.

These things are BIG. My bench is 8′ long and they barely fit. These are the biggest reason I changed around the configuration of my benches, as I needed a single flat surface to build these monsters true. I’m also going to build both the left and right flaps simultaneously, as it will be much easier to follow the instructions for how to build the left flap, then at the same time, build a mirror image for the right flap (the instructions only describe the left flap).

Tonight was mostly spent figuring out which part goes where, pondering the -r and -l parts (which don’t refer to the left and right flap, just the direction of the flange!). Again, doing the left and right flaps as mirrors to each other made this pretty easy.
Once I knew what went where, I got most of the flap attach brackets fabbed up and match drilled. 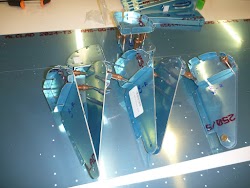 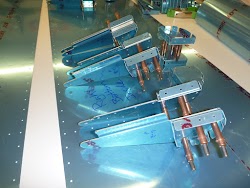 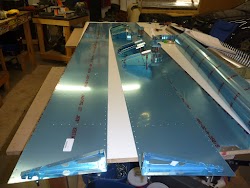 As for the video tonight,it kinda sucks. I was working on pretty small parts quite far away from the camera, so you can’t see what I’m doing very well. Sorry about that. I’ll try to frame my shots better going forward!