Starting on the doors

The doors on the RV10 have a reputation of being one of the more difficult, frustrating, and time consuming portions of the build process. Historically, the fiberglass door components from Van’s haven’t been the highest quality, and alignment marks that are formed into these pieces are normally considered a joke.

With this in mind, I jumped at the chance to have my EAA Tech Councilor Gary stop down for the day and get me off on the right foot.

The first step was to draw a bunch of lines on the door skins, as both cut lines, and guide lines for drilling cleco holes later. I got this done in less than 10 minutes. I just took a tongue depressor and drilled out holes at the measurements needed. I then stuck a pencil in the hole, and ran around the perimeter. The only line that is really important at this point is the inner 3/4 marking for the window cutout, as it will be the final cut line for the window opening.

Once the door skins were marked, they needed to be cut down. I was getting ready to get the cutoff wheel and go out in the snow and cut away, but Gary told me to grab the metal snips. It turns out the thin fiberglass of the doors cuts GREAT with just the snips! I did use a multi-tool for a few thick spots, but the snips were fast, and NO DUST!

With the door skins trimmed down, we prepared the bonding surfaces between the skin halves by sanding them down.

Before sanding the bonding surfaces: 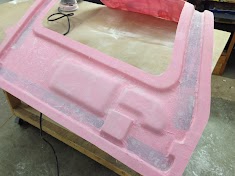 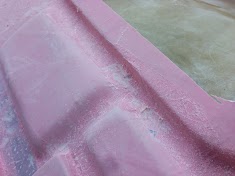 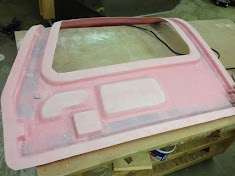 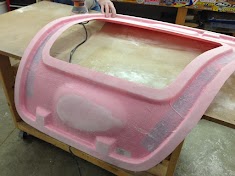 Next, we had to figure out how the inner and outer door skin would be lined up with each other. The manual just tells you to use the alignment holes that are around the perimeter of the window opening. NONE of these holes remotely lines up between the two halves. There are also two alignment holes on the forward and rear edges, that are used to align the door to the cabin. These DID line up. So we put a cleco between the halves, held the two halves together tightly, and drilled a few of our own alignment holes around the inside of the window opening.

We also lucked out in that the two good alignment holes also lined up to the proper holes on the fuselage. This meant we were able to just cleco the door right to the plane to check fit. 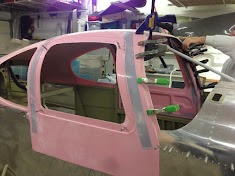 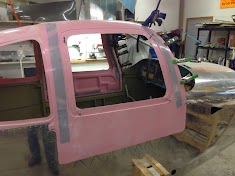 Having made sure the doors were going to fit, it was time to work on epoxying the two halves together. The first step was to bond in a reinforcement plate. This plate is where the door lift spring will attach. The plate just needed to be trimmed to fit, scuffed, and epoxied. 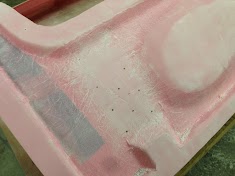 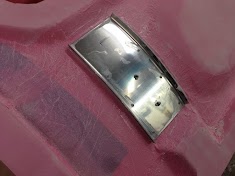 After the plate was epoxied and temporarily clecoed in place, we started laying down the epoxy that would actually join the two halves. There are two locations on the door that need a structural bond, but the inner bonding surfaces are irregular: the “head cavity” and the “elbow pocket”. To make a solid bond between two irregular surfaces, you use a 3 dimensional fiberglass woven mat called Parabeam. It feels like a 3/4″ thick fiberglass sponge. We wet the bonding surface, set the parabeam, and wetted it down. Just like regular fiberglass cloth, just thicker, and with more expoy.

We also spread some epoxy/cabosil mixture around the window and edge perimeter. 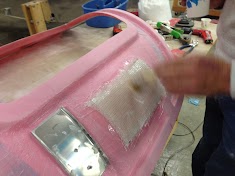 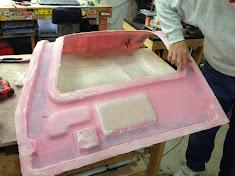 Then came the two step process of sticking the skin halves together, and attaching it to the cabin top so it would cure with the proper contour. The manual calls for you to cleco the bottom of the door to the open holes in the fuselage, and use clamps and duct tape where the door meets the cabin top. Gary suggested that we just drill holes in the cabin top and cleco the entire thing, so that’s what we did. Once one door was on, we repeated the process with the other. 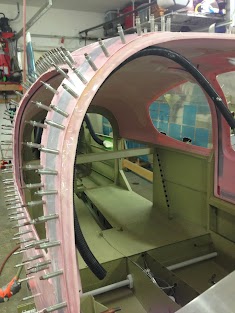 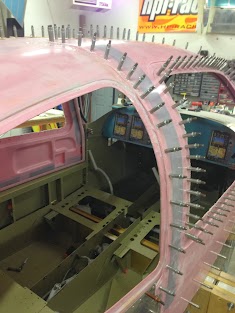 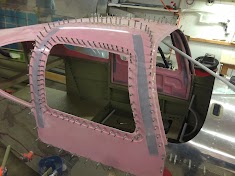 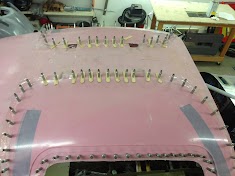 Along the top edge of the door, because the skins didn’t overlap the cabin top enough to drill thru, I used some tongue depressors clecoed into the top as clamps.

Overall, the process worked GREAT! The door was held very firmly in place, with no gaps between either the skin halves, or between the door and the cabin top. Now I’m going to let the whole thing sit for a day or two so the epoxy can fully cure before I pull the clecos.

***Note from the future: After the epoxy cured, and the clecos were removed, the door still fit the cabin top wonderfully!