Tonight was a quick one at only one hour, but that was because we were time limited with one of the materials we were working with tonight. ProSeal is a fuel tank sealant, but it is used a few other times in the build when one thing needs to stick to another. It’s best described as a cross between roofing tar, epoxy, frosting that would be served on a cake in hell. It’s sticky. Really sticky. And it’s used to help bond the trailing edge of the rudder together for a nice tight, strong fit. Many rubber gloves sacrificed themselves to keep our hands clean. It has a set time of 30 minutes, so everything had to be in place quickly. Colleen and I even did a dry run before hand so we both knew exactly what needed to be done. 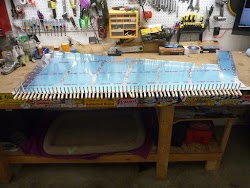 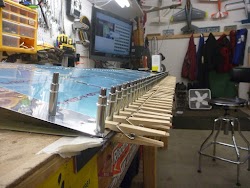 The technique I used for keeping the trailing edge straight was based on what a number of other builders did. I Followed the directions in the manual, except instead of just clecoing the trailing edge together, I actually clecoed the entire trailing edge to a piece of angle iron. It will sit like this for two days as the ProSeal cures. Once it’s cured, it will be pulled up, and that same angle iron will be used as a back rivet plate for the rivets that also go thru the trailing edge. The clothes pins are just there for a little extra help holding the skins together between the clecos.

Here is the video. Don’t blink, it goes fast: