Rudder: More deburring, a little counter-sinking, and a little slip up

Colleen was nice enough to come out to the airplane factory and help me do some deburring tonight. Just like all the other parts before, all those holes that I final drilled need to be debarred before dimpling, primer, and assembly. 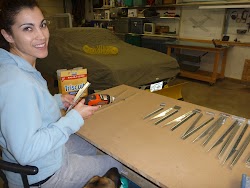 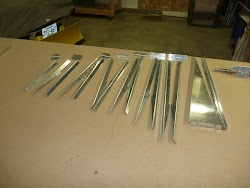 I also got the extruded aluminum stiffener wedge for the trailing edge countersunk to accept the dimples that will be in the skin. While I was countersinking, Colleen was clearing the protective plastic film away from the rivet lines on the rudder sking. 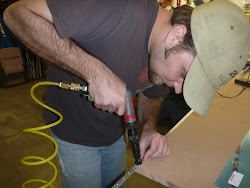 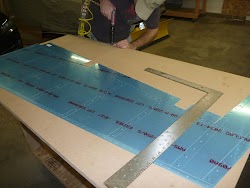 The final thing I wanted to get done for the night was to put a slight bend in the skins at the trailing edge. This bend helps the skins stay tight together at the trailing edge after they are riveted. I even have a special tool called an edge former that’s supposed to make the bend fool proof. I managed to prove that you could still mess it up! 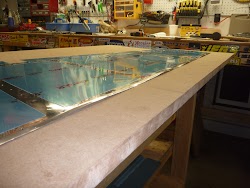 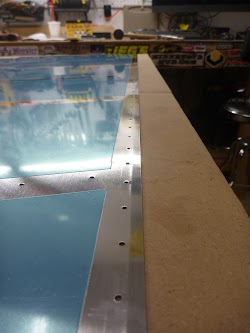 On the left you see my first attempt at forming the edge. I made the mistake of having too much pressure in the tool and pulling the tool too fast. On the right, you see my second attempt with the second skin, this time with much less clamping force, and a nice slow deliberate CAREFUL pull. It looks like it was made by a machine. I fiddled with the first skin a bit to see if I could get it to lay flat again… but it never got much better than in that picture. I had almost resigned to calling Van’s to order a new skin when I figured I’d at least put the skins together with the extruded wedge and see how they laid. 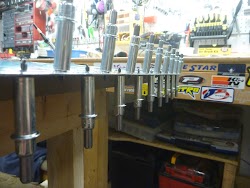 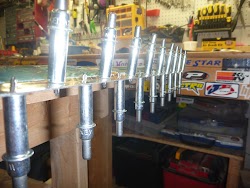 Turns out the little bit of waveyness in the skin is almost undetectable when it’s reinforced by the wedge and the other skin. Plus, as was pointed out to be by the great people on the Matronic’s RV10 email list, once this is pro-sealed, riveted, sanded, and painted, it should look fine.

Not a great way to end the night, but I think it’s going to turn out OK. At worst, this is a cosmetic thing. At best, it won’t even be that.