My lovely rivet buddy Colleen and I got started on riveting the top wing skins on to the wing. I used a new riveting technique recommended by Mike from Cleaveland Tools. It’s basically back-riveting, except instead of using a fixed plate to support the manufactured head, you use a big mushroom shaped bucking bar that you hold TIGHT against the skin. Then you just use the back-rivet set as normal… except I used a longer back-rivet set to allow a better angle past the ribs.

Apparently, Mike knows what he’s talking about, because these are the best looking, most consistent rivets on the entire plane so far! Which is good, because the top of the wing is about the most visible part there is!

It did take a little bit to get a groove going, but once we did, we made pretty good time. The counter-sunk holes seemed to be a little trickier to get centered, as there aren’t nested dimples to line everything up.

By the end of the night, we had the left inner skin done (minus the rear spar… I’m going to order a new squeezer yoke to get those.) 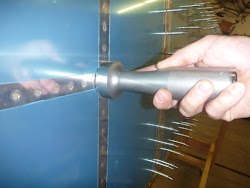 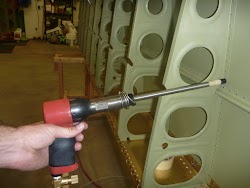 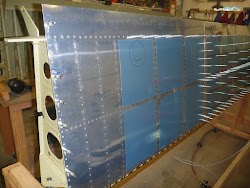 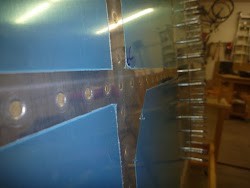