No actual work was completed on the airplane all weekend, but I got a lot of things done that needed doing!

Having finished everything I could do on the vertical stab before priming, I figured that I should figure out what I’m going to do about priming. First, I did a whole lot of reading. Primer can be a point of contention among airplane builders. People argue about whether or not to prime at all, about alodin-ing, which primer is the best, application methods, and about a dozen other things that I didn’t have a clue about.

After lots of soul searching, I have come up with a plan of attack. Van’s says that you don’t really need to prime alclad aluminum at all… and most 50 year old Cessna’s and other certified planes were never primed and are still in good shape. Many builders go that way. It’s faster, cheaper, lighter, and looks great.

On the other side of the fence, there are MANY people that alodine (a “conversion coat” process) almost everything, and then prime on top of that. The advantages are that the aluminum is about as protected as it can get, but this is time consuming, expensive, and many of the chemicals and very toxic.

I am going to take the middle ground. I am going to simply scuff the parts and apply a very good 2 part epoxy primer called Azko Nobel 463. This is a very durable primer used by many of the large aerospace companies… so it’s good enough for me. It’s expensive ($180 for 2 gallons), but in the great scheme of airplane building, it’s a small price to pay to have your interior structure protected.

Having made that decision, I needed a place to actually spray all these parts. I live in Minnesota, so even though we have had a ridiculously warm winter, it’s still too cold to try to prime parts outside. I need to prime somewhere warm which means the garage, but I have my Trans Am in here, my shiny black car, and Colleen’s white truck. Not to mention things like the TV, computer and countless other things I’d rather not have dusted in over-sprayed primer. This meant I needed to build a spray booth. I didn’t want to lose a bunch of space (or pay for) a big walk-in spray booth, so I build a “lean-in” spray booth. 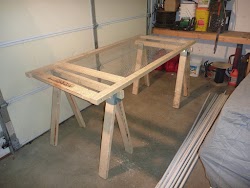 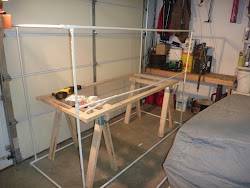 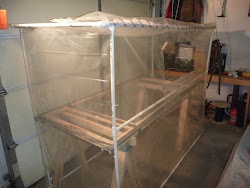 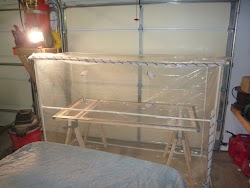 It’s a 6′ x 34″ table I build out of 2×3’s and 1/2″ hardware cloth sitting on saw horses and a frame of 1/2″ PVC surrounded by 4 mil clear poly. It’s fully sealed except for the window I cut in the front. I’ve ordered a 4″ marine bilge blower that moves 250 CFM and a 20″ duct to run under the garage door when I’m spraying. If that doesn’t move enough air to keep over-spray contained, I’ll add another bilge blower. These blowers are designed to remove possibly combustible gasses from the bilges of boats before engine start, so they shouldn’t give me any problems with igniting the over-spray.

I also put a light above the plane work tables as it was a little dark over there, and finally got some pictures of the storage I put up to store all that good stuff that comes in the empennage kit. 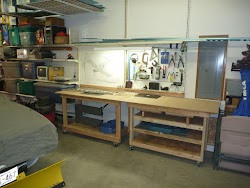 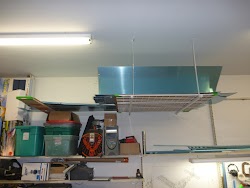 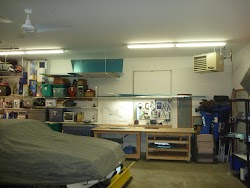 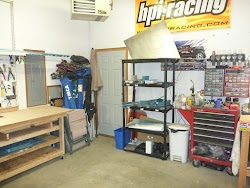 One thought on “Primers decisions and building a spray booth”