I started the day with a pile of primed flap parts, and ended the day 10 hours later with a pair of flaps that were 90% done!

First, the nose ribs, spacers, and hinge brackets are riveted together. Next those parts and the main flap ribs are all riveted to the spars. All pretty straight forward. I was able to reach most of the rivets with my squeezer with the longeron yoke, and only had to drive a handful with the gun and bucking bar. 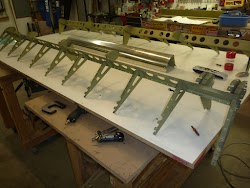 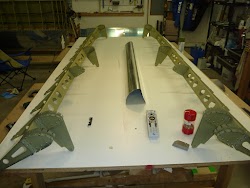 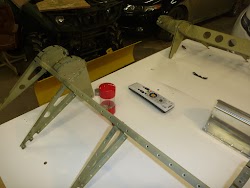 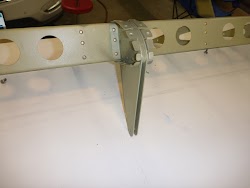 With the skeleton finished, I decided that I had a few spots where I wanted to touch up the primer, so I took the skeletons outside and shot them with a little rattle can primer.

Next, the nose skins were clecoed in place, then the flap top skins added. Then the nose skin and top skin were riveted to the top of the spar. 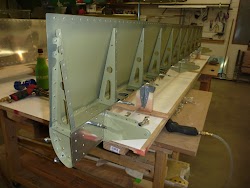 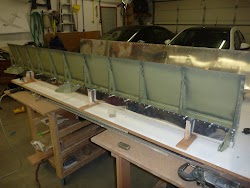 Once those rivets were set, I riveted the top skins to the main ribs. This was also pretty straight forward, but I was glad to have the smaller tungsten bucking bar that I do. Held sideways, I was able to buck the rivets in the ribs easily, even though it is a pretty tight fit in there. Because of this tight fit, the last two rivets that join the ribs to the top skin are back riveted, and have notches in the rib to allow for the rivet set to get in there.

Next, the bottom skins get riveted to the spar. These are just normal 3-3.5 and 3-4 rivets, so you need to get your hand in there to buck them. It’s a tight fit, and again, I was VERY glad to have the nice tungsten bucking bar that I do.

And to end the night, I put in the nose rib rivets. These are just acountersunk pop rivet, as there is no access to buck these… but two of them gave me more problems than anything else in the flap build. The problem was that for two rivets, the stem of the pop rivet fell thru the rivet and into the flap before I could get the rivet gun on it. That shouldn’t have been a big deal, as I could just shake the flap around and get the stem to drop out, but for some reason, I then couldn’t pull the stemless rivets out of the holes! I tried easing them out with a discarded stem from another pop-rivet, easing them out with a center punch, but they were just stuck in there. Finally, I ended up grabbing them with a vice grip. They wouldn’t even pull out then. So what I did was crush the rivet as small as possible, and then drove it thru the hole and out the other side. What a pain!

After those two problem rivets, I set the rest of them by placing the stem of the pop rivet into the gun, squeezing it a bit so it had a good grip on the stem, and THEN installed the rivet in the hole. No problems once I started using that technique.

As for tonight’s video, I think it’s my favorite video in the build yet. It was a long day, so It’s a longer video (6 minutes), but shows the entire construction of the flap from beginning to basically the end in one shot. Plus I had the camera placed in a decent location!