After seeing what the standard fuel caps that Van’s includes in the kit, and because I want to keep strangers from messing with my fuel supply, I upgraded to the premium locking gas caps made by Newton. These caps are very nicely made, have a nice smooth action (the stocks are best opened with a bottle opener. Seriously.), and lock.

Future Edit 11/5/2018: It appears that Van’s no longer sells the fuel caps I’m using. Mine are the Newton 300 series. Van’s seems to be selling the RV14 style plastic locking caps instead now, but they still call them the Deluxe Locking Caps! Contact Newton for more information: https://www.newton-equipment.com/

They also come with the flange pre-curved to match the curve of the upper wing skin. Unfortunately, they mush have curved them for a much smaller wing, because they have WAY too much curve in them. In order for them to sit flush against the skins, I had my buddy Jake throw them in his lathe and take a bit of the profile out. This is the same thing Mouser did, which you can see on his build site.

Once the flanges were the right profile, I had to drill them to the skins. I put the caps in the flanges, and used a piece of packaging tape across the hole in the skin to hold everything in position until I got the first hole and cleco in place. Worked perfectly!

After the caps were in place, I did some work to on the tank attach brackets, and match drilled the inner rib and rear baffle on one of the tanks. 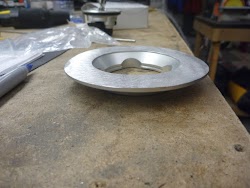 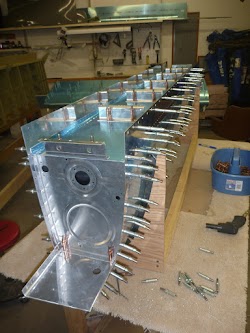 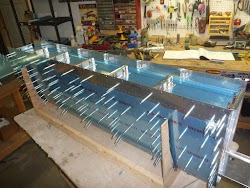