There are two options for fuel level sensors that I looked at for my -10. First is the standard float type sensor. It’s basically a float on an arm. As you fill the tank with fuel, the float floats, and raises the arm the higher the fuel level goes. Pretty basic.

While this is a simple system that can be bolted right in, it has a few draw backs. First, since the tank sits at an angle due to the dihedral in the wing, and the float sits at the inner edge of the tank, the float is fully submerged quite a bit before the tank is actually full. This means that you read full until you burn off 5+ gallons. They are accurate at the end however, where you really need it to be accurate.

The second draw back is that it’s another moving part, and moving parts will wear out eventually. The arm could get stuck or the float could get saturated and stop floating.

There is another option, though. It’s called a capacitive sensor, and that’s what I chose to go with.

They work on the principle of black magic.

A capacitor is constructed of two parallel conductors insulated from each other. The amount of capacitance is related to the distance between the conductors and the type of insulation. The insulation between the conductors of a capacitance fuel level probe consists of air and/or fuel. As the fuel lever changes, so does the capacitance. The capacitance is part of an oscillator circuit. As the capacitance changes, so does the oscillator frequency. The frequency is converted to a voltage that is displayed with a fuel gauge. The advantage of a capacitance type fuel level probe is that there are no moving parts. The disadvantage is that the gauge must be calibrated each time that the type of fuel is changed because unleaded fuel and leaded fuel and gasohol each have different insulating properties. When the fuel tank is almost full, the capacitance fuel gauge will display different levels depending on the type of fuel in the tank. When the tank is almost empty, the fuel gauge will be more accurate because air is now the insulating medium and the probe does not know or care what type of fuel used to be in the tank.

The main advantages are no moving parts, very accurate from full to empty, and they aren’t affected by sloshing fuel very much, if at all.

Now, Van’s makes capacitive sensor kits for a bunch of their planes, but the -10 isn’t one of them. So I did what other people have done. Bought the sensor kit for the RV-9 and made my own sensor plates. 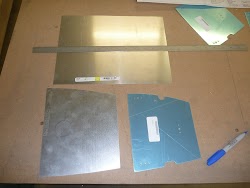 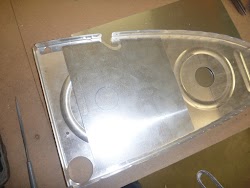 Using the -9 plates and instructions as a guide I fabbed up 4 plates. There is a requirement that the plates be at least 3/16 of an inch from any metal part of the tanks, so I made a little spacer out of a popsicle stick that was 7/32 wide. I’d install the plate in the tank, and if I could run the spacer around with out catching anywhere, I knew I was good.

After quite a bit of installing, marking, adjusting, and repeating, I got a very nice fit. 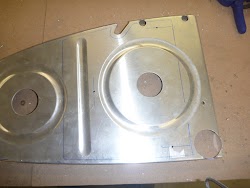 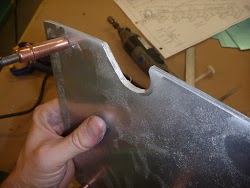 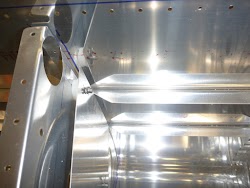 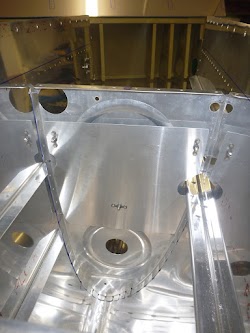 I also scanned the finished sensor plate on my computer and saved it as a PDF file.  Then if anyone else is looking to make these plates, they can print out the PDF (I scanned a ruler next to the plate to confirm scale) and use it as a template. It should at least get you close.

Of course, there is the HUGE DISCLAIMER that I haven’t tested these plates in a tank with AVGAS, so I can’t confirm that this design actually works. Having read that, if you want the PDF, here it is: RV10 Capacitive Fuel Sensor Template

As for tonight’s video, well, it kinda sucks. I had it focused on the bench I was working on, but I also spent a lot of time out of frame on the band saw, sander, grinder, and in the fuel tank. So it is what it is.