A new year, and a new section of the plans! 2013 bring us up to the construction of the ailerons.

Before I started the ailerons, I made a slight change to my workspace. I had a big sheet of melamine laying around, and I figured it would be prudent to have a large FLAT workspace for the upcoming ailerons and flaps. So a couple of 2×4’s, a bunch of shims, a level, and some wood screws, and I have a nice clean surface that is much more level than the underlying benches. 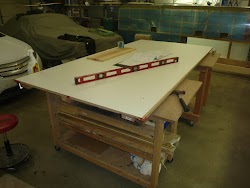 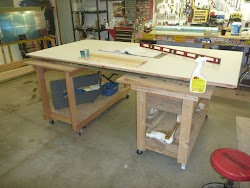 Construction begins with constructing some wooden cradles that will hold things in a convenient orientation while putting things together. The cradles are made by simply tracing the flap nose ribs onto some wood and cutting them out with a jigsaw. The flab ribs are a little bigger, and these same cradles will be used for both the ailerons and the flaps.

Then I matched up the nose ribs to the spar, paying close attention to left and right parts. Having enough space to build both ailerons (and upcoming flaps) simultaneously gives you the advantage of building the left part as the plans describe, and also building it’s mirror image for the right part (which the plans don’t specifically walk you thru.

Nose ribs in place, I started clecoing on the front skin, and placed the counter balance tube, match drilling the parts as they are called for. You can see me doing some head scratching in the video, trying to figure out the left and right ailerons, and the parts with the -L and -R on them. The -L and -R only tell you the direction of the flange, not which aileron… so you need to think thru how everything is going to lay out very carefully. 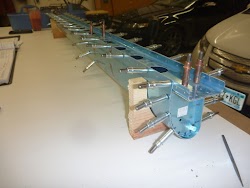 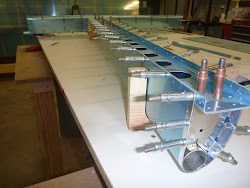 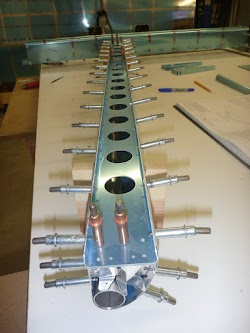 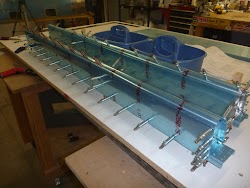 Next the aileron attach brackets were match drilled in place. 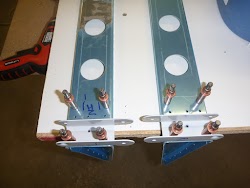 And finally, the stiffeners for the aileron skins were cut to size and deburred. There are 32 of them, so this was pretty time consuming. Finally, I did some more pondering to make figure out which skin went where. The top skins are asymmetrical, and need to have the stiffener rivet lines offset to the right of the lower skins, which are symmetrical. Once that was accomplished, I marked the skins so there would be no confusion as to which skin was which, and what was inside and out. I clecoed the stiffeners to the skins and called it a night.