Tonight, I worked on installing the left side gear leg fairings.

These are the fairings that smooth out the airflow over the gear leg itself. Because they are angled both outwards and rearwards from the fuse, it took a little planning to get these fairings perfectly aligned with the airstream. Based on feedback from a number of other builders, I elected to not use the Van’s intersection fairings, and choose to use the iFlyRV10 fairings from Cleaveland Tool.

The plans call for you to use the plane’s step as a reference point, and run a string from the step forward to the fairing, then around and back to the step. The trick with this is that the string needs to be level with the plane in flight attitude, and also parallel with the centerline of the airplane. This was pretty simple thanks to the prep work that I did getting the wheel pants aligned. I started by shooting a laser level between the top of the step to the gear leg, and then ran a string along the laser’s path. Then, using a laser plumb bob, I figured out how far off of centerline the front of the string was, and slid the string along the step until the string was parallel with the centerline. After that, I confirmed that it was still level (which it was).

Then, I wrapped the string around the front of the gear leg, and back to the bottom of the step. The step is thinner than the gear leg fairing, so I taped a little piece of scrap wood in place, as I needed to get the lower string parallel to the top string. This was easy to check for by measuring the distance between the strings at the front, and then sliding the string around in the rear to get the same measurement. Then I also sighted between the two strings to make sure they weren’t twisted. If you look at the correct angle, the top string should be able to obscure the bottom string if they are perfectly parallel. 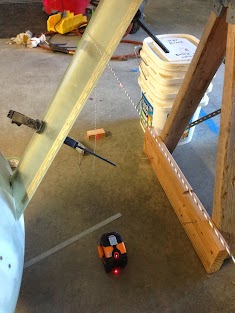 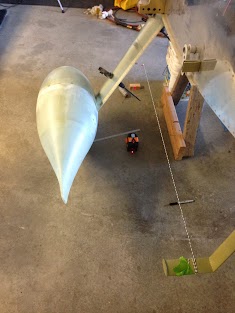 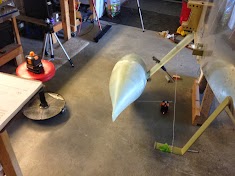 With the strings set, I could align the fairing. The way to do that is to make sure the trailing edge of the fairing is exactly between the two strings. A lot of setup for one measurement, but that’s just what you have to do if you want it right. 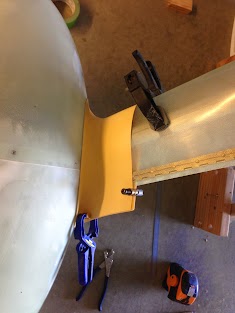 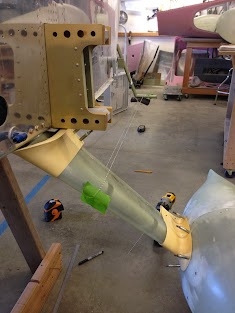 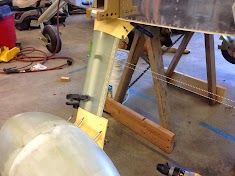 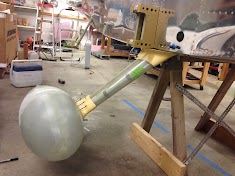 Finally, repeat all of the above on the other side!